Insights What are the FATF Grey List and Blacklist?

The Financial Action Task Force (FATF) is an intergovernmental organization that monitors global money laundering and terrorist financing trends. The FATF collaborates with its member states and regional organizations to develop a legal, regulatory, and operational framework for combating these threats. As part of its efforts, the FATF maintains a blacklist, officially known as High-Risk Jurisdictions subject to a Call for Action, and a grey list. The grey list includes countries that have committed to addressing strategic deficiencies in their anti-money laundering and counter-terrorist financing (AML/CTF) regimes. Given the potential regulatory risk associated with countries that do not maintain international compliance standards, financial institutions should be aware of FATF blacklist and grey list countries and what that designation entails.

What is the FATF Blacklist?

The FATF blacklist (sometimes referred to as the OECD blacklist) is a list of countries that the intragovernmental organization considers non-cooperative in the global effort to combat money laundering and the financing of terrorism. By issuing the list, the FATF hopes to encourage countries to improve their regulatory regimes and establish a global set of AML/CTF standards and norms blacklisted countries will likely be subject to economic sanctions and other prohibitive measures by FATF member states and international organizations.

The blacklist is a living document issued and updated periodically in official FATF reports. Countries are added and withdrawn from the blacklist as their AML and CFT regulatory regimes are adjusted to meet the relevant FATF standards. The first FATF blacklist was issued in 2000 with an initial list of 15 countries. Since then, the lists have been published as part of official FATF statements and reports yearly and sometimes twice yearly. As of October 2022, the following countries were included on the FATF blacklist:

The FATF cites significant deficiencies in the blacklisted countries’ AML/CTF regimes and suggests other countries exercise extreme caution when doing business with firms based in these jurisdictions. While the FATF has called on its member-states to “apply effective counter-measures” in any business dealings with North Korea, Iran, and Myanmar, it has noted Iran’s prior commitment to improving its AML/CTF regulation. Accordingly, the FATF has set out the steps for Iran’s removal from the list, including a requirement to ratify the Palermo and Terrorist Financing Conventions.

While it has no direct investigatory powers, the FATF monitors global AML/CFT regimes closely to inform the content of its blacklists. Some observers have criticized the term “non-cooperative” about countries on the blacklist, pointing out that some blacklisted countries may, rather than acting in defiance of international best practice, not have the regulatory infrastructure or resources to enact the FATF’s AML/CTF standards. 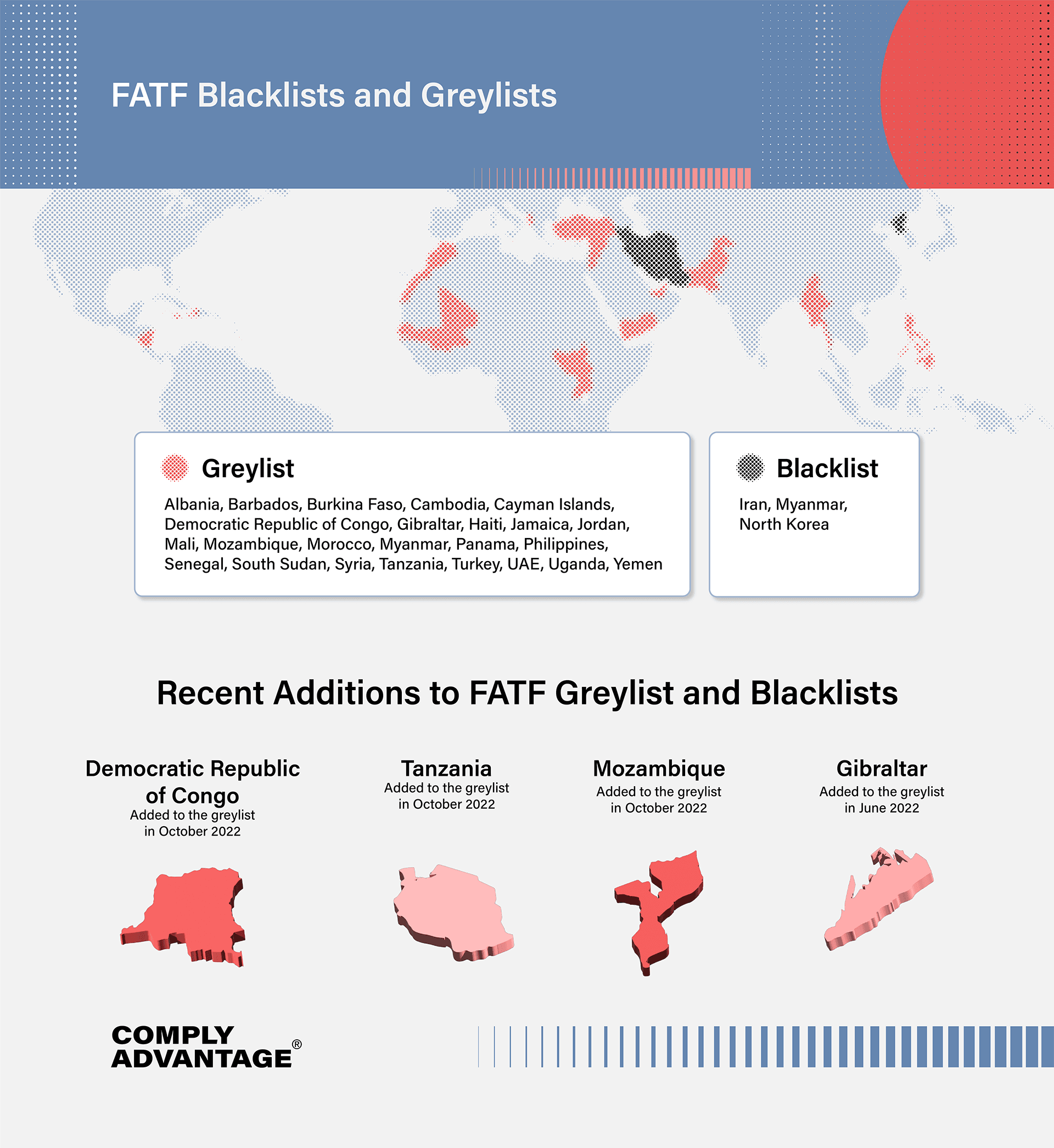 The FATF grey list, officially known as Jurisdictions Under Increased Monitoring, includes countries with deficiencies in their AML/CTF regimes. Like the blacklist, the grey list was created in 2000 and is updated periodically. Countries placed on the grey list are subject to increased monitoring and must work with FATF to improve their regimes.

To do this, the FATF either assesses them directly or uses FATF-style regional bodies (FSRBs) to report on their progress toward their AML/CTF goals. While grey list classification is not as punitive as the blacklist, countries on the list may still face economic sanctions from institutions like the International Monetary Fund (IMF) and the World Bank and experience adverse effects on trade.

The grey list is updated regularly as new countries are added or as countries that complete their action plans are removed. As of October 2022, the FATF grey list included the following countries:

Recent Additions to the FATF Grey List and Blacklist

The FATF continuously reviews its member states’ AML/CTF performance to gauge their alignment with its regulatory guidance. The FATF has recently added the following countries to the grey list:

Democratic Republic of Congo: The FATF added the Democratic Republic of Congo (DRC) to the grey list in October 2022. The decision was made due to insufficient progress by the country on the recommendations laid out in the DRC’s latest Mutual Evaluation Report (MER). The FATF has stated the DRC must fully address the identified strategic gaps by implementing the proposed action plan by 2025.

Jordan: Following an MER in 2019, Jordan committed to addressing deficiencies in its domestic money laundering and terrorism financing regulations. In October 2021, FATF determined that Jordan had not made sufficient progress toward those objectives, and it was added to the grey list.

Mali: The FATF added Mali to the grey list in October 2021. Like Jordan, Mali’s addition to the grey list was motivated by a lack of progress toward achieving objectives in its 2019 MER. The FATF primarily focused on risks in the country related to terrorist financing.

Mozambique: Following an MER in 2021, Mozambique made a high-level political commitment to addressing deficiencies in its domestic money laundering and terrorism financing regulations. While the FATF noted that the country had made progress on some of the MER’s recommended actions, sufficient progress had not been made, resulting in Mozambique being added to the grey list in October 2022.

Myanmar: In February 2020, Myanmar committed to addressing the strategic deficiencies highlighted in the country’s 2018 MER. However, Myanmar’s action plan expired in September 2021, with no substantial progress having been made. In June 2022, the FATF strongly urged Myanmar to complete its action plan by October 2022. Due to a continued lack of progress and the majority of the country’s action items still not addressed a year beyond the action plan deadline, the FATF added Myanmar to the blacklist in October 2022.

Tanzania: Following its MER in 2021, the FATF notes that Tanzania has made progress on some of the MER’s recommended actions to improve its AML/CTF system. However, due to several outstanding action points yet to be completed, the FATF placed Tanzania on the grey list in October 2022.

Turkey: The FATF added Turkey to the grey list in October 2021 after determining that it had not made sufficient progress toward addressing the issues set out in its 2019 MER. The FATF cited specific concerns about the terror financing threats from Turkey’s neighbors, Syria, Lebanon, Iraq, and Iran.

United Arab Emirates (UAE): The FATF added the UAE to the grey list in March 2022 following a Plenary and Working Group Meeting in February 2022. The FATF determined that while the UAE had made “significant progress” since its 2020 assessment on issues related to money laundering, terrorism financing, confiscating criminal proceeds, and international cooperation, further progress is required to ensure investigations and prosecutions of money laundering cases are “consistent with UAE’s risk profile.”

Recent Removals from the FATF Grey List and Blacklist

Just as countries are regularly added to the blacklist and grey list, countries that progress in addressing their AML/CTF deficiencies are removed from the lists. With that in mind, the FATF recently removed the following countries from the grey list.

Mauritius: In 2020, FATF added Mauritius to the grey list, citing deficiencies in its beneficial ownership controls and procedures for confiscating crime proceeds. After following the FATF’s action plan to address those deficiencies, including developing new risk-based supervision plans and law enforcement training plans, Mauritius was removed from the grey list in February 2021.

Botswana: Botswana was added to the FATF’s grey list in 2018. In 2021, following a series of assessments from the Eastern and Southern Africa Anti-Money Laundering Group (ESAAMLG), Botswana was deemed compliant with previously-cited AML/CTF deficiencies. Accordingly, FATF removed Botswana from the grey list.

Bahamas: The Bahamas was removed from the grey list in December 2020. The FATF cited Bahama’s “significant progress” in strengthening its AML/CFT systems following deficiencies identified in 2018.

Nicaragua: After returning to the grey list in February 2020, the FATF announced Nicaragua was no longer subject to increased monitoring as of October 2022. While the FATF congratulated Nicaragua on improving its AML/CTF regime, strong caution was given on the potential misapplication of the FATF Standards resulting in the suppression of Nicaragua’s non-profit sector. The FATF encouraged Nicaragua to ensure its oversight of non-profit organizations is risk-based and in line with the FATF Standards.

Zimbabwe: Zimbabwe was added to the grey list in 2019 after its assessment highlighted various deficiencies in the country’s implementation of the AML/CTF Standards. As of March 2022, the FATF’s report cited Zimbabwe’s “significant progress” in improving its AML/CTF regime and its effectiveness, thus removing the country from the grey list.

Given the increased risk of money laundering and terror financing that blacklisted and grey-listed countries present, most financial authorities require firms to have suitable risk-based AML/CTF protections to mitigate that threat.

Accordingly, firms must screen customers against the FATF blacklist and grey list during onboarding and throughout their business relationship and monitor their transactions on an ongoing basis. To screen accurately, firms should ensure that their customer due diligence measures verify their customer’s residence in, or business with, listed countries. They should also check that their transaction monitoring measures can scrutinize the size, frequency, and pattern of transactions involving high-risk countries to establish whether criminal activity, such as money laundering, is taking place.

Try our Screening Solution for Free

Screen any name or entity against live Sanctions, PEPs and Adverse Media data and insights for free