Four Trends Shaping the State of Financial Crime in 2023

Insights Four Trends Shaping the State of Financial Crime in 2023

2023 was supposed to be the year we escaped the shockwaves of the COVID-19 pandemic.

Unfortunately, the results of our annual survey of 800 C-suite and senior compliance decision-makers across the US, Canada, UK, France, Germany, Netherlands, Singapore, Hong Kong, and Australia suggest otherwise.

Here are four top trends we’ve identified from the financial institutions in our survey:

99 percent of organizations globally told us they’re re-evaluating their risk appetite due to the economic environment. 57 percent are doing so “to a great extent.” This more conservative approach, and the additional customer due diligence it will require, is set to pile further pressure on the expectation that access to financial services is slick and frictionless.

Underlying industry caution is an expectation that, as in previous economic downturns, levels of financial crime will increase. This may not entirely come from hardened professional criminals, either. Economic pressure is likely to drive a wider increase in risk-taking behavior from previously legitimate actors, some of which will cross the line into financial crimes.

While the economic outlook is bleak, compliance professionals are realistic. 59 percent are braced for increased financial crime, with 58 percent planning to hire more staff. Despite expectations that unemployment rates will rise – and double in the US by the end of 2023 – just 11 percent of organizations anticipate reducing the size of their compliance staff.

2. Fraud and scams continue to evolve

Our survey data showed tax and investment fraud as the joint top concerns for compliance professionals in 2023. While both are likely fuelled by the economic downturn, investment fraud, in particular, often runs counter-cyclically to the economy. As easier methods of accessing finance dry up, the temptation to resort to bogus schemes offering apparently “market-beating” returns increases.

Credit and debit card fraud remained a major concern, cited by 39 percent of respondents. Much of this is driven by e-commerce, with purchases made via phone, internet, or mail-order using stolen cards estimated to surpass $10bn by 2024. The popularity of credit cards for online purchases means they are involved in a significant amount of this fraud.

Emerging typologies such as synthetic identity fraud also featured significantly, surpassing concern about crimes such as elder and romance fraud. KPMG cites synthetic ID fraud as the fastest-growing financial crime in the United States, costing banks more than $6bn. 2023 is likely to see synthetic ID fraud grow further, with criminals identifying new ways to exploit consumers aligned with ongoing economic pressures. One example of this is mortgage fraud. As rising interest rates push up mortgage costs in many countries, those desperate to attain financing may seek to use more advanced but increasingly accessible technologies to bypass lender requirements that are becoming progressively more stringent.

International concern about environmental crimes and wildlife trafficking soared in 2022, reflecting the threat posed to food security, political stability, conflict, and forced migration. When asked which predicate offenses were most important to their organizations, more than one in four selected environmental crime, making it one of the top selected offenses. This is despite its inclusion in our survey for the first time in 2022. Environmental crime was also the second highest typology of concern for firms when submitting suspicious activity reports (SARs), behind only tax evasion. Some of the growth in demand driving environmental and wildlife crimes can be attributed to the easing of pandemic restrictions, which has made activities like poaching easier. In June 2022, China also suspended a wildlife trade ban introduced in January 2020 to tackle potential sources of COVID spread. The global downturn has already led to scaled-back resources, resulting in less capacity to train rangers and investigators in source countries, including Botswana, South Africa, Kenya, Namibia, and Tanzania. Against this backdrop, United for Wildlife estimates illegal wildlife traders will “return to full profitability within 2-3 years.”

This year our global survey asked about the use of decentralized finance platforms to support extremist political groups for the first time. 87 percent of respondents said they’d seen an increase in the use of these platforms to fund extremism, with 31 percent believing the growth to be “significant.” 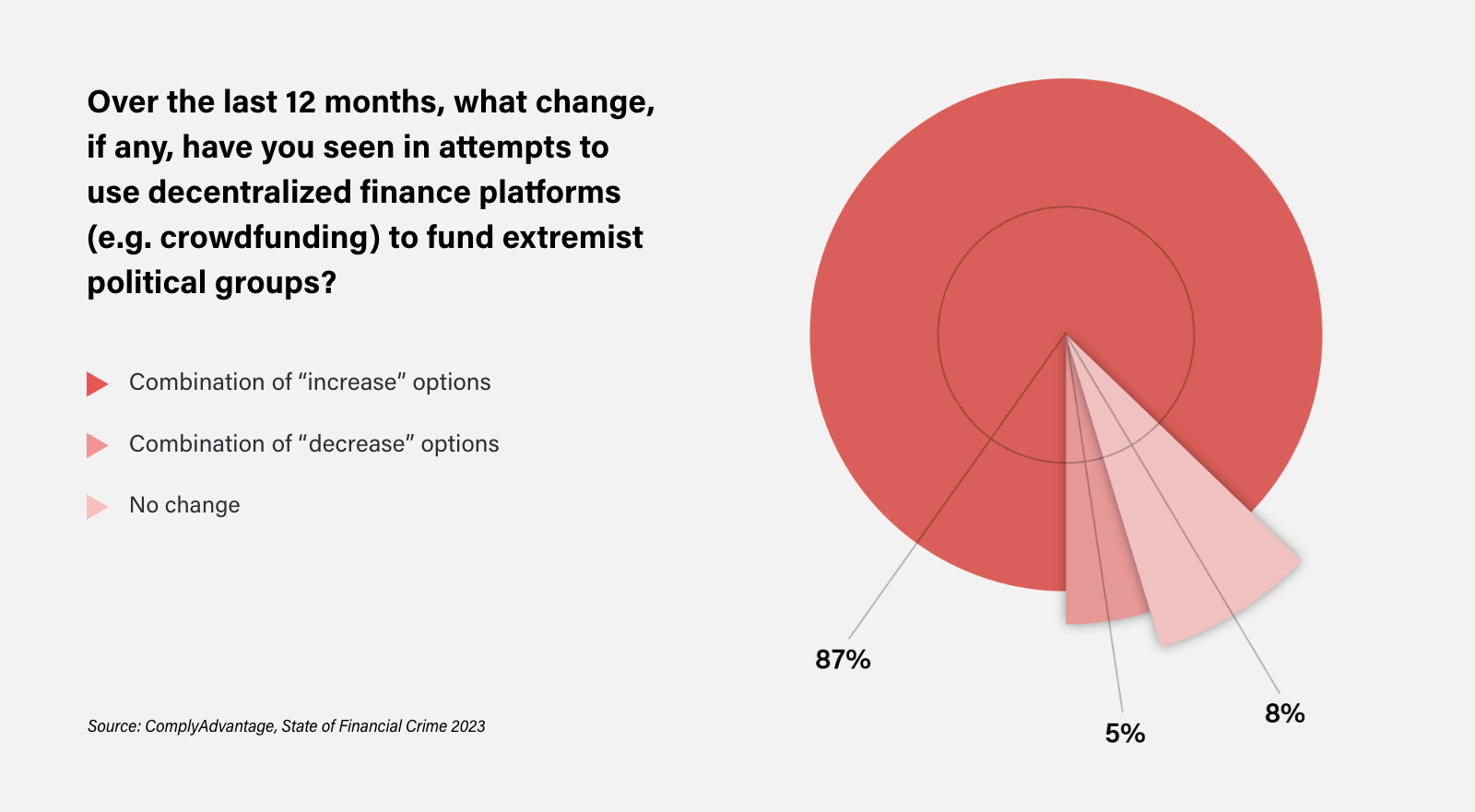 Protests across Ottawa and US-Canada border crossings have elevated global concern about the use of crowdfunding platforms for extremist groups. On February 4th, 2022, GoFundMe closed a campaign supporting the “Freedom Convoy” due to concern it had become an “occupation” and amidst widespread reports of violence. The group then pivoted to GiveSendGo, a platform which, according to The Washington Post, describes itself as “the leader in Christian fundraising,” where it raised over $9m.

Crowdfunding has also supported Islamic State (IS) operatives in Syria. Reporting indicates family members of young men trapped in Syrian camps have attempted to use the Telegram messenger service to “bring them to safety.” It’s believed some of those looking to escape are doing so to fight for IS. In a report issued on March 1, 2022, the US Treasury explained how domestic extremists have used legal fundraising methods to support their activities, making them harder to detect. The Treasury also highlighted the pandemic’s role in making these platforms “a necessity rather than a convenience.”

To find out more, download our Spotlight on Financial Crime report today